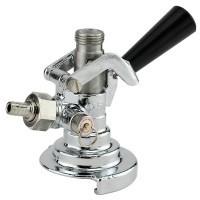 This European Sankey coupler works with S system keg valves. Itâ€™s very similar to a US Sankey (D Coupler), but the stem that goes into the keg is about 1/4-inch longer on this European version. Fits most European beers.